In this interview, Prof. Bahaaeddin Alhaddad explains the factors that define happiness in cities. The place where you grow, your emotional issues and the outer world are key issues that determine it. Technology is not a tool to provide happiness but it can help to create comfort. Prof. Alhaddad is putting it into practice with UNIQUE, a project that introduces neuroscience with geographic information through brain monitoring to observe how we react within the city. 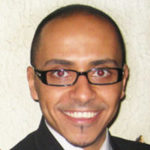 Dr. Bahaaeddin Alhaddad received his BSc in Architecture in 2000 (Gaza, Palestine), obtained a MSc in Space Systems on Earth Observation in 2002 (Lecce, Italy) and pursued a PhD in Urban Management and Valuations in 2009 (Barcelona, Spain). From 2004 to 2011, being staff of the Centre of Land Policy and Valuations- CPSV/UPC, he has been intensively involved in several European collaborative projects. He joined the Centre for Advanced Spatial Analysis- CASA at University College London- UCL to work on urban remote sensing and Smart Cities related projects, in 2011. Since 2012, he is working as Space Business Development and urban remote sensing expert at Starlab Ltd, Harwell Oxford Innovation Centre (UK).