Dan Lewis introduces the need to address urban-based crisis prevention and response. The threat of urbanization outpacing the capacity of local governments to keep up and maintain delivery of services and the effects of a changing climate are two issues to be tackled. Taking into account the New Urban Agenda and its acceptance from the members state of the United Nations, Lewis stresses the need to empower local governments in order to prevent disasters and to define urban resilience programs.

As he mentions, it’s fair to say that we expect the population to reach 10 billion by 2050, that’s not that far away. We expect the urban population to be a 70%, the double of the urban population today. It’s about concentration of people and the risks that accumulate such concentration. Amongst this array of different hazards and shocks, rapid immigration is one and there are ways to address that, such as creating initiatives like Barcelona Ciutat Refugi, born to respond to the current humanitarian crisis, to shelter refugees and to guarantee all their rights. To Lewis, we need to look at the immigration flows as flows of assets, assuming that the people who come bring something within. 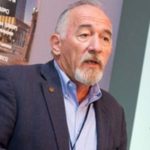 Sameh Wahba: "Urban resilience is the ability of cities to become stronger"
Covid-19 and the future of cities: 9 emerging trends in digital transformation
A decarbonized recovery against climate emergency: 3 lessons cities have learned during the pandemic