We know that, by 2050, cities will be home to over 70% of the world population. And one of the global greatest challenges is to adapt urban areas to an increasingly changing climate. Laura Tenenbaum is a globally recognized science and climate communicator and the former Senior Science Editor of NASA’s Global Climate Change website. For her, science and research have to be able not only to provide us with a diagnosis of how climate change will affect cities –sea level rise, heatwaves, water shortages–, but also to reach those who can change things locally: the policy-makers.

What is more, “Climate change is the perfect opportunity for researchers and city planners to interact” – Laura Tenenbaum tells us. Because to find and build effective city-management solutions to the climate emergency, an integrated approach is needed. “Researchers and policy-makers cannot stay siloed in our separate worlds: we have to interact and come together”, she adds.

But how to pave the way to interplay? To Laura Tenenbaum, one essential requirement is to combat climate disinformation. “There have been massive campaigns powered by the fossil fuel industry to spread disinformation about climate change, which have been widely successful in confusing people and slowing down action”, she denounces. However, there is room to make things right and move towards more sustainable, human-centered urban areas. Laura Tenenbaum’s formula involves making a decided commitment to electrified cities and stop building any new power plants that rely on carbon. “That would be lovely to see”, she concludes. 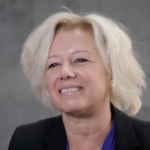 Laura Faye Tenenbaum is an award-winning globally recognized innovator in science and climate communication. She is the former Senior Science Editor of NASA’s Global Climate Change website at NASA’s Jet Propulsion Laboratory, where she reported on sea level rise, ice mass loss, climate modeling, anthropogenic climate forcing and regional climate impacts. She was chosen to travel to Greenland multiple times with NASA suborbital campaigns to report on new research into the rate of ice mass loss around Greenland’s coastline being studied for the first time.

Tenenbaum has been an adjunct professor in the Physical Science Department at Glendale Community College, where she taught for 13 years.