Mikael Colville-Andersen is an expert in designing cities for bicycles, what he names «bycicle urbanism». To him, it is so urgent to create a space for cycling in cities, that it has become a global movement. If pedestrians and cars have a designed network to move within the city, bikes need one too.

He argues that it is possible to take back the streets for transport in a democratic way. He has seen and proved it in Copenhagen, where today 62% of its citizens’ cycle to work. However, it was not always like this in the Danish capital. Copenhagen almost lost its bicycle culture in the 1950s and 1960s, but they brought it back and built it in the 70s and 80s. And so are doing right now cities such as Sevilla, Buenos Aires, or Detroit.

When Colville-Andersen refers to Barcelona he inevitably thinks about Ildefons Cerdà and his urbanistic plan for the city. What would he think if he saw what happened to the streets he designed? «Cerdà did not imagine cars in the city, we need to look at New Cerdaism»,he tells us. «Which means taking the layout of Barcelona as we know it, and take it back to what he wanted us to do it», says Mikael Colville-Andersen. 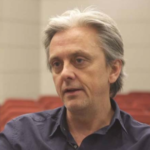 Mikael Colville-Andersen is an urban designer and urban mobility expert. As former CEO of Copenhagenize Design Company, he advised cities and governments worldwide towards becoming more bicycle friendly. He is a keynote speaker at design and architecture conferences and events around the world on the subjects of urbanism, liveable cities and bicycle history.

A decarbonized recovery against climate emergency: 3 lessons cities have learned during the pandemic
Covid-19 and the future of cities: 5 keys to keep moving towards local sustainability
Catherine D'Ignazio: «Cities don't think about gender enough»