Today, cities emit about 70% of the world’s carbon emissions. To Pontus Westerberg, Programme Management Officer at UN-Habitat, this fact is related with one of cities’ main current challenges: urban sprawl. «This urban planning model of the 20th century – too much focused on the use of car and where it is required to move very long distances between work and home – is something that we need to change now in the 21st century to make our cities more inclusive and sustainable», he points out.

How to pave the way to make evolution towards greener, more equal and walkable cities? To Pontus Westerberg, it is essential to promote an urban model based on mixed use and social mix. And, in that sense, he highlights technology – drones, Big Data, Artificial Intelligence – as an important tool «to help us better map and understand the way cities are functioning and optimize them».

If there is, however, one crucial area in which technology can help us design better cities for all it is public participation. This is exactly what the Block by Block initiative – where he has been involved since 2012– is about: offering people from all ages and backgrounds accessible and fun design tools to involve them more directly in the transformation of urban spaces. «Essentially, what we are doing is using Minecraft, a really easily accessible video game, to crowdsource urban design ideas from ordinary people», Pontus Westerberg tells us. «We provide training to communities so they can end up sketching urban design ideas on Minecraft to improving their public spaces. And then we invite in the policy makers to have a discussion about how to take forward those ideas into the final designs and into their implementation», he adds.

Since the Block by Block project was launched, Pontus Westerberg has helped implement more than 50 urban design ideas in 30 countries – impacting the lives of more than 1.5 million people – and has held Block by Block Workshops in Kenya, Madagascar, Niger, South Africa, Mexico, Philippines, Nepal, Vietnam, Kosovo and Ecuador. He has also presented Block by Block at events worldwide including Responsive Cities Summit and Habitat III, demonstrating once again that urban innovation it is all about thinking outside of the box.

Through the @blockbyblockorg project, @pontusw has put #Minecraft at the service of communities to design 50 urban spaces in more than 30 countries | #CitiesToBe Click to tweet 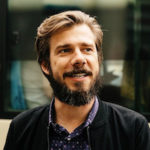 Pontus Westerberg is Programme Management Officer at UN-Habitat, where he has been responsible for the Block by Block programme, a global initiative that uses Minecraft as a community participation tool in the design of public spaces worldwide. Since 2012, he has helped implement more than 50 projects in 30 countries and has held Block by Block Workshops in Kenya, Madagascar, Niger, South Africa, Mexico, Philippines, Nepal, Vietnam, Kosovo, and Ecuador. He has also presented Block by Block at events worldwide including Games for Change Festival, Responsive Cities Summit, Habitat III, The Impact of Civic Technology, Aldea Digital, MINECON, and Made in Space.

Pontus is certified in project management and speaks English, Kiswahili, Spanish, and Swedish. He earned a master’s in Global Media and Postnational Communications from the University of London School of Oriental and African Studies and currently lives in Barcelona, Spain.