Raquel Rolnik analyses the impact of the financial power in cities and considers how fundamental the idea of the right to the city in a world increasingly colonized by the global finance is. Rolnik considers that urban and housing policies must be faced as a whole in order to achieve what she believes is the best use of a place: the use that meets citizen’s needs. 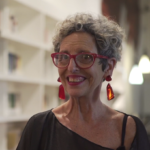 Emilia Sáiz: "Competition among cities is not an impediment for cooperation"
Martha Thorne: «Public space has to enable the idea of community»
Tatiana Gallego: "Financing urban infrastructure is a real challenge for Latin American cities"