At Anteverti we maintain a great relationship with Argentina, a country with which we have collaborated on various occasions. In recent years, we have supported the Argentine government in the design of its national ‘2035 Innovation Agenda: Smart and Sustainable Cities’, a process in which we analyzed up to 30 medium-sized cities throughout the country and helped define 52 prioritized actions in the short, medium and long term make urban management in Argentina more innovative and sustainable. Precisely its capital, Buenos Aires, a pioneer city and a privileged meeting point, has recently been recognized at the World Smart City Awards 2021 with the City Award — the main one — for its ambitious plan to move towards a sustainable, inclusive and circular waste management system.

Diego Fernández, Secretary of Innovation and Digital Transformation of the Government of the City of Buenos Aires, was the person who received the award during the last Smart City Expo World Congress in Barcelona on behalf of his city, and it is our pleasure to have him in our series ’10 Years, 10 Urban Ideas‘. These are his answers to our questionnaire.

My city is Buenos Aires, the capital of Argentina. In my opinion, Buenos Aires has the great virtue of combining four factors in a unique and incomparable way. First of all, a cosmopolitan style as we can find in cities like Madrid or Barcelona. Furthermore, its architectural richness combined with its Parisian-style urban landscape — a depth and cultural diversity that, in my opinion, can only be compared to cities like New York. And, above all this, its Latin warmth and its Río de la Plata vibes. All this makes Buenos Aires a unique city to live, work, know and enjoy. I believe that other cities can take inspiration from the richness of diversity and the combination of history and modernity of the city of Buenos Aires.

«Buenos Aires has the great virtue of combining factors in a unique and incomparable way.»

1. The first one that I think is important to highlight is the growing urbanization that cities experienced until the Covid-19 pandemic began. It is clearly a long-standing trend, but one that has been strengthened in the last ten years. And, above all, with more than half of the world’s population living in urban areas, it has made clear both the benefits and the problems we face in cities.

2. When talking about urban growth, we also have to focus on informality — and in relation to this, I believe that there has also been a defining transformation. I believe that today, and in the last 5 years, an awareness has been created around the world about the informal city as a constitutive part of the urban being. But that awareness has the particularity of offering a fundamental paradigm shift — which is having understood that we must integrate informal settlements into the city, create holistic solutions together with their communities, and not consider informal settlements as a problem— but quite the opposite.

3. Much more recently, I believe that the third relevant transformation happens, or will happen, due to the effect of the Covid-19 pandemic on urban life. A lot has been written about it around the world, predictions of all kinds flourished, but we still cannot know what the urban effects of Covid-19 will be in the medium and long term. Will the pandemic change trends that we have been observing in recent years? Will it create greater awareness about the use of public spaces? For now, we can only make supositions.

Tallinn, the capital city of Estonia. Today I firmly believe that it is the city that has advanced the most in digitization and innovative processes, which have made it the smartest city in the world. It is our point of reference in terms of digital identity projects, smart and automatic government.

Austin, Texas, United States. Step by step, the city is managing to combine its own university life, culture, innovation and technology in a very attractive eclectic mix.

«Tallinn, the capital of Estonia, has become the world’s smartest city.»

First, I highlight Parag Khanna, who while not technically an urban expert, explains the geographical relationships of humanity in a way that allows us to project the future evolution of cities in the holistic arena of development competition. His latest book «Move» is especially interesting.

I also admire Jane Jacobs. I believe that she is the person who managed to humanize the conception of cities and was the greatest contributor to modern urban life today. Her first book, «The Death and Life of Great American Cities», is still valid today despite having turned 60.

…the engines of economic, cultural, technological and social development of humanity, displacing nation-states from that role.

💭 @fernandezdiego · @gcba: «In 10 years, cities will be the engines of economic, cultural, technological & social development of humanity, displacing nation-states from that role.» | #10Years10UrbanIdeas — a series by @Anteverti 👇🏼 ﻿Clic para tuitear

Interview and edition by Sergio García i Rodríguez, Manager of Communication at Anteverti and Executive Editor of CitiesToBe. Interview translated from Spanish. 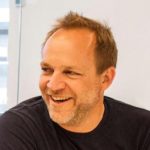 Diego Fernández is passionate about technology, transformations and great challenges. He was Secretary of Social and Urban Integration of the City of Buenos Aires, the capital of Argentina — carrying out the integration of Barrio 31, one of the main informal settlements in the country. Today, he leads the Secretariat of Innovation and Digital Transformation of the Government of the City of Buenos Aires.