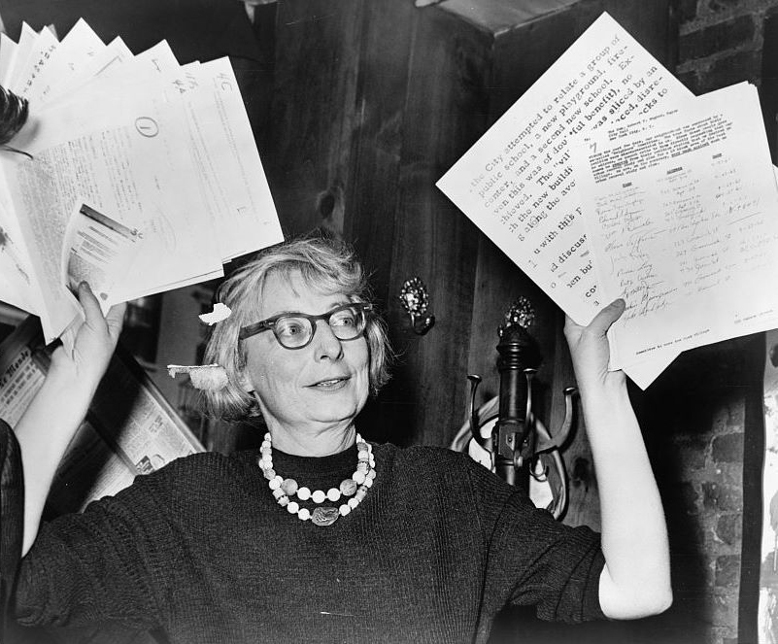 It’s the 100th anniversary of Jane Jacob’s birth, and the challenges of her generation are still the ones we are facing today.

She protested against large projects in the New York of the 50s and the 60s, when urban development in the city was at its apogee. She became popular for her confrontations with Robert Moses (urban planner and the “master builder” of mid-XXth century New York). Although she had failures – like the demolition of Penn Station, against which she protested along with a large group of New Yorkers -, we remember her for her victories. One of her most famous ones was leading the citizen mobilization that succeeded in stopping the Lower Manhattan Expressway, thus saving the emblematic Washington Square. She was a woman, a journalist, an urbanist, an intellectual and an activist for the rights of people in cities. Those who know her will already know we are talking about the exceptional Jane Jacobs (Scranton, Pennsylvania 1916 – Toronto 2006).

Although not having an official training as an urbanist – something for which she was delegitimized on several occasions -, Jacobs wrote pieces that gave – together with other contemporaries, like Henri Lefebvre -, a new perspective to the urbanism of the time, influencing many later generations.  Some of the most prominent are, for example, her famous book The Death and Life of Great American Cities (1961), a strong critique of the American urban development model and advocate of the right of communities, or The Economy of Cities (1969), where she emphasized the importance of local production in the metropolis. Moreover, Jacobs introduced concepts and terminologies that are still today often used in the field of urban studies, such as the “city as an ecosystem”, the “mixed-uses urban development” or the “bottom-up community planning”, something bound to the term she herself coined, “eyes on the street”, with which she encouraged communities to look at their neighbors and commit themselves to them, thus creating networks and collaboration and mutual care.

Last May was Jacob’s 100th birthday, and various entities organized events to celebrate it. Under the hastag #JJ100 and #Janes100th, the Municipal Arts Society of New York (MASNYC) had an open call to collectives and global institutions to organize self-managed initiatives (installations, walks, workshops, performances in the public space, etc.). The actions are grouped on a website organized by the MASNYC, where there is an open form for anyone who wishes to sign up their initiatives. The Center for the Living City – an institution for urban and communitarian development based on the legacy of Jacobs-, has also organized a series of activities that can be found on the website www.janes100th.org.

Although her vision of cities has been criticized for bringing with it processes of gentrification, Jane Jacobs’ contributions have been indispensable for a change of perspective in city development. Unfortunately, after so many years and despite the clarity with which she transmitted her ideas, her messages still today need to be passed on to governments and large corporations. Cities are for people, and decision-making should not just depend on so-called “planning experts” or large construction companies, but on urban communities and their local experience.

Article originally written in Spanish for the magazine Encuentros, cultural supplement of the Diari de Tarragona. Translated by Rebecca Smith and edited by Cristina Garrido. 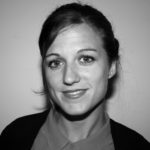 Since 2013, Cristina Garrido is anteverti's Director of Innovation and Strategic Development. She has more than 15 years of experience working with international city governments, companies and organizations and helping them develop their innovation and strategic plans. Cristina is the Co-Curator of the international congresses related to the Smart City Expo World Congress and also directs the blog www.citiestobe.com.

With a background in arts and urban studies, her expertise focuses on how innovation can be a tool for improvement, sustainability and strategic development of cities. She has written for several publications and, up until 2017, was an Associate Lecturer at the Universitat Oberta de Catalunya (UOC).

Cristina Garrido holds an MA in Urban Sociology, a BA in Visual Arts and Cultural Studies, and has a Diploma from the Stanford Graduate School for Business, for the Ignite Program for Business Innovation (2017).